We all know that we need to cut emissions of carbon dioxide and other greenhouse gases.

As detailed in the latest report from the UN’s Intergovernmental Panel on Climate Change (IPCC), the evidence for humanity’s effect on the climate is unequivocal.

To give us the best chance of avoiding the worst effects of unchecked global heating, we need to limit the increase in the Earth’s mean temperature to 1.5 degrees C. To do that, many countries ­including the UK have committed to reducing their net greenhouse gas emissions to zero by the year 2050.

This is a huge economic, social and technological challenge.

For the UK, it means doubling our electricity output to power transport systems, heating and industry, at the same time as phasing out the fossil fuel power stations which currently provide half our electricity.

That means we need to quadruple our production of low-carbon electricity.

Meeting that challenge will take a mix of technologies. Wind and solar can play a huge role, but can only produce power when the wind blows or the sun shines on the UK.

Smart grid systems, large-scale batteries and other energy storage technologies can help smooth out the peaks and troughs, but significantly add to the cost of renewable power and are not available at the scale required.

Nuclear is the only proven low-carbon generation technology which can provide reliable baseload power to balance the variability of wind and other renewables.

In terms of greenhouse gas emissions per unit of power produced, nuclear is as clean as offshore wind – around 12g per kilowatt-hour, which is significantly better than other technologies. 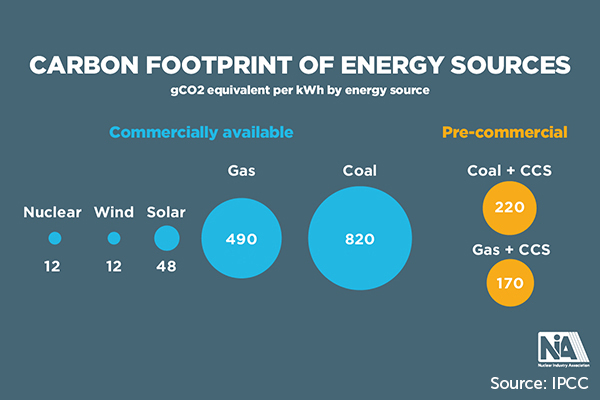 Nuclear currently makes up around a third of the UK’s low-carbon generation. But almost all of our current nuclear power stations are set to close well before 2050 – the 7.7GW AGR fleet will shut down entirely this decade (Dungeness B and Hunterston B have already ceased production), and EDF is now working to extend the life of the 1.2GW Sizewell B to 2055. We’re set to lose a big chunk of our clean energy, just when we need it most.

As a country, we urgently need to invest in new generation – wind, solar, nuclear, and any other viable technology that can help us reach net zero emissions.

Nuclear makes economic as well as environmental sense. New designs of reactor can match offshore wind in cost per unit of power. And unlike other technologies, that cost includes all the additional investment required for waste management and eventual decommissioning.

Nuclear power also provides more employment per megawatt capacity than any other generation technology, and can create high-value jobs across the UK.

Don’t just take our word for it. To find out more from organisations which don’t have “nuclear” in their name, check out the links below:

For an in-depth look at nuclear’s role in the low-carbon energy mix and activity around the UN’s Cop26 climate change conference in Glasgow, visit the Net Zero Needs Nuclear website hosted by the Nuclear Institute’s Young Generation Network.

How can we help you win work in nuclear? Contact us